The first thing to understand about the Cuban tres is that it is a rhythm instrument. Even though it looks like a guitar, the actual playing of it is rhythmic with melodic lines. Chords are seldom “strummed”, and in many styles the Cuban tres strengthens the melody line a 3rd or a 6th above with rhythmic fills in between.

The traditional tuning of the Cuban tres is as follows G,C,E where the E string is the same as a guitar high E. In a modern context the tuning is often up a step and is A,D, F# or an open D chord.

History of the Cuban Tres

No one is quite sure when or where the first Cuban tres was developed. In order to fully understand the history of the tres Cubano, I have transcribed a conversation I had with Dr. Olavo Alen Rodriguez at the Centro Investigación y Desarrollo de la Música Cubana (CIDMUC), in Havana Cuba. This interview took place in November 2003.

Jon: When was the Cuban tres born?

Olavo: Musical instruments aren’t born at a certain time like Human Beings. They begin forming a new type of musical instrument. That doesn’t happen in only one place. It happens in different places at the same time.

So, the most accurate information that can be obtained for the Cuban tres, is that it was born in the area of the Sierra Maestra Mountains*. That means in Oriente (Eastern Cuba), around the mid to late 18th Century and it had its ancestry in the Spanish Guitar.

What would you play? tat, ta, tat, ta, ta, tat (sings rhythm), you can bring that to a drum. Or, the other way around. It’s like doing a polyrhythmic effect with the whole thing. That is the concept of playing with drum ensembles.

Jon: And probably somebody had a guitar with only 3 strings on it.

Olavo: Exactly, and probably that happened in different ways in different places at about the same time. Until they all agreed that this is now a new instrument, or someone said “that is not a guitar”. Or, he was using a guitar for another purpose, for example an instrument was missing and the part was played on the guitar and he said “I have too many strings”, so he took some away and then doubled them. I don’t know how it came to be, I don’t think anybody knows. At that time people weren’t interested in looking for that kind of thing (ethnomusicology), and they didn’t have any way to record it. That is the most accurate information that we have.

This first example is from Con Sabor Al Guaso, De Guantanamo, and features an almost Changüi feel. It is not really Changüi for several reasons.

Having said that, if you listen to the entire track, you will find that there are many elements of Changüi in the Tres part. Especially the solo sections.

The second example (also from Con Sabor Al Guaso) is a son pattern from the Baracoa region of Cuba. It is still considered Cuban Son because there is no montuno section. The syncopation is not as prevalent as in the prior son, and this hints of a more modern interpretation. 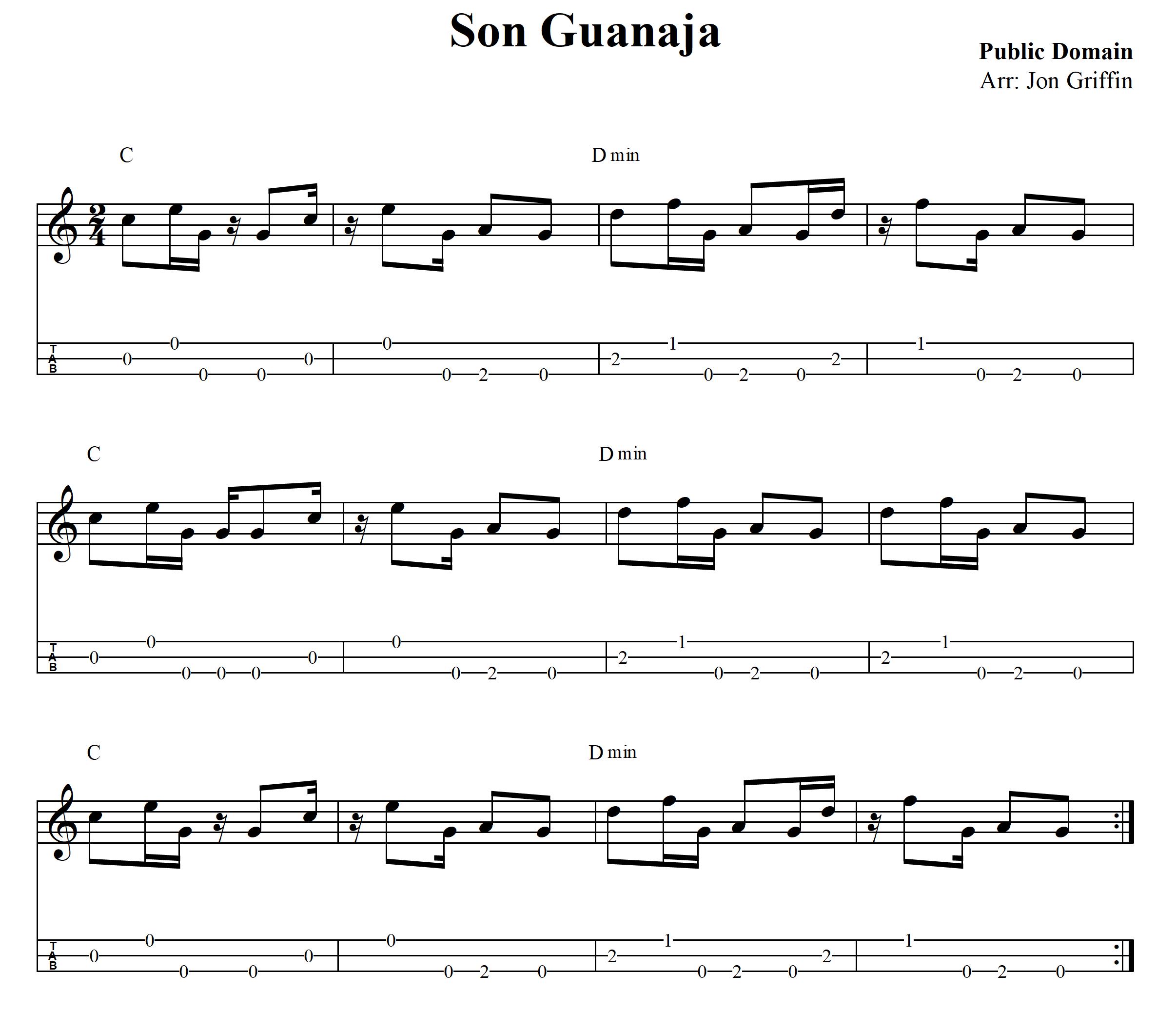 This third example is from my private collection of recordings and is an example of a Modern Son tumbao. This example has many embellishments and also includes some double stops. Note that it emulates the piano part more than the old styles. And although clave is more difficult to discern for most people it is still 2-3.

Books and other stuff about the Cuban Tres

Another resource is the recently released Cuban Masters Series: The Cuban Tres

It is available on DVD or Book.

There are certain fundamentals that anyone playing Cuban music must understand. These go beyond clave and montuno. You must learn about the role of hand percussion and how the singer phrases his melody and inspirations. Don’t skip over this material simply because you may feel that you don’t need to know it.