Bongos – The Most Cuban Instrument 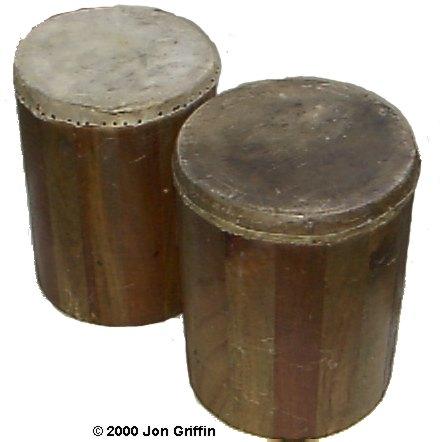 This Cuban musical instrument was born in the context of the complex musical styles that pertain to the Son, in the mountainous regions of the eastern extreme of the country. It consists of two small drums, of different sizes, held together by a strap or a piece of wood or metal that provides separation among their bodies or sound boxes. Each drum possesses a single membrane, or skin, and each one of these skins is tuned to a different pitch. The current system of tension (for tuning the skins) consists of metal rings and screws that form the shapes of hook and nuts. The drums are played together, never separate.

To play this instrument, the bongo player generally sits down and rests the instrument between his knees. The bongos are held in pace by adding pressure to the external edge of each drum with the skins facing up. The larger of the drums is placed to the right which facilitates that most of the execution be carried out on the smaller drum that is then set to the left. If the drums are joined by a strap then the player, also seated, places the strap on his right thigh settling each drum to a respective side of his leg.

The main musical function of the bongo is that of creating a complex rhythmic accompaniment that provides great stability to the music. This has allowed for the development of patterns, or rhythmic schemes, specifically created for this instrument. The toque martillo, or “hammer-style,” is one of the best-known patterns that can create a sequence of eight different sounds and timbres. Nevertheless, the bongos are capable of enormous possibilities in the production of sounds with different pitches and very diverse timbres. This has inspired the player to use the bongo as a solo instrument, becoming an ideal instrument to fill spaces dedicated to rhythmic improvisation.

Since its historic beginnings, the bongo adapted to the expressive needs of Son. Perhaps this was the reason that there exists two different styles: 1. Son Montuno, that covers the regions of Santiago de Cuba and of Manzanillo; and, 2. Changüí, in the territory of Guantánamo. Nevertheless, the only substantial difference is that the Changüí-style bongo, also known as bongó de monte (or mountain-style bongo), has greater dimensions and therefore produces tones lower in pitch than its counterpart used in the Son Montuno.

When the Son sextets invaded the cities of Cuba in the first decades of the 20th century they brought with them the bongo. The instrument then began to be utilized in the very diverse music forms that were adopted from the urban Son and became a part of other instrumental groups that combined the accompaniment styles of many diverse musical styles, such as: the canción cubana (or the Cuban song), bolero and the canción trovadoresca (or troubadour-style song). Previously the bongo had been associated with the countryside of western Cuba and was used in different musical settings belonging to the punto guajiro or punto Cubana.

The bongo is one of the national musical instruments that was born in Cuba. It has achieved greater approval during the 20th century in various genres of rock music and international pop music, as well as, jazz and salsa.

Changüi didn't have martillo since it hadn't been invented yet and played a very syncopated style. There is also no clave pattern used.

There are many examples of the use of bongos in Cuban music.

In this book, you will learn about the Cuban tres and how to play it correctly. This is an intermediate to advanced series, but even beginners can benefit.